CACAO MENTAL live show is a tribal ceremony of technological animism, a wild and immersive party, an acoustic experience built by extensive use of improvisation and artificial sounds that rig soundscapes as rich as the jungle: a shaman voice over the hammering of the electronic grooves, around trumpet themes and lysergic guitar twangs: suggestions, explicit homage to mariachi, cinematic quotations, pure psychedelic rides and pop culture references that have replaced the allegories of the primitive man in the subconscious of modern man. Every CACAO MENTAL show is a unique performance, it is a CUMBIA state of mind. 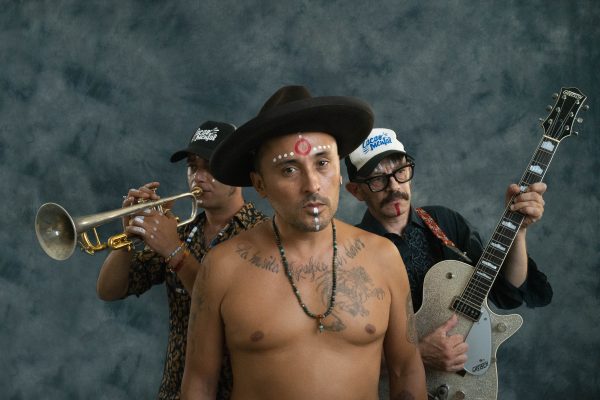 Kit Ramos: native of Tingo Maria, a city on the edge of the Peruvian forest, sings from early age in mariachi, salsa, flamenco and cumbia formations. He brought his vocal style from South America to Milano in 2002, where he resides today. He has played with many groups including Tren del Sur and Mariachi La Plaza, where he met Stefano Iascone, and from this meeting began his transformation into a shamanic cumbiero, a synthesis of different vocal attitudes in a unique visceral and primitive style.

Marco Pampaluna: guitarist with a long experience with Figli di Madre Ignota, has worked with Banda Osiris and Firewater. He has brought into Cacao Mental sounds from Tex-Mex to Duane Eddy, psychedelic echoes and alien guitars sounds.